this letter to Norman Court by Pablo D'Stair

Below is an excerpt of this letter to Norman Court, the first book of the five-book Trevor English series being resurrected by All Due Respect Books. This scene is what hooked me almost ten years ago, when the series began as a serial on crime fiction blogs.


One of the girls working behind the counter—I think maybe the one who’d wrapped my burger, passed it to the guy working the register to set on my tray—she’d made sort of quick, flirting eye contact with me while I’d been in line, but she hadn’t looked up to see where I’d sat down or anything. It had been flirting, though, like she’d for a moment, anyway, thought I was attractive, was probably even having a little fantasy about me, who I might’ve been, what I might say, do to her, but it was the sort of thing she knew it’d be ruined by looking at me again. I kept my eye on her anyway, kind of, not even so much thinking about anything. 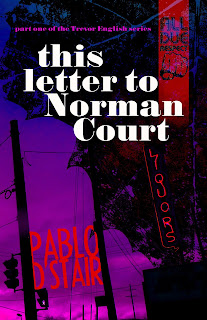 I’d taken a large bite, was taking a drink to help me swallow it, when some guy sat down right at my table, nodded at me, smiling and it wasn’t until I’d mashed the swallow down, caught my breath and was saying Can I help you? I realized it was the guy I’d stolen his wallet about two days before.
‘Sixty, seventy dollars, it isn’t much money,’ he said.
I coughed into my hand, had another quick sip of my drink, wiped the excess from my lip.
‘It was forty dollars.’
No point in playacting the innocent for this guy.
‘Forty?’ He hardly seemed like he was paying attention, his saying Forty might not even’ve been a question.
‘It was forty, forty-two, something. Look, it’s gone, it’s spent. And I’m sure you probably canceled your credit cards, everything, but I don’t bother about those and I don’t leave them around for people might take them.’
‘Why not?’
I didn’t like this person, he looked like the clothes he was wearing and nothing else, that’s all somebody would describe him by if he went missing or robbed a bank or something.
‘Because. I don’t know why not.’
‘You can’t sell them to people or something?’
I shrugged, glanced over to the counter, behind it, the girl not looking up, still.
‘Why would somebody buy a credit card someone’s just gonna cancel?’
I knew there were reasons, knew what he was talking about, but I didn’t know anything about it, in a practical sense—this guy’d probably watched a movie or some news magazine, had all sorts of little ideas about everything he’d picked up here and there. Thing was, he could chit chat it up, whatever he thought he was doing, I didn’t care. There was obviously certainly nothing he could do about it, unless he was gonna shoot me, cut me down at the Wendy’s or whichever place this was. The wallet was gone, it’d been forty-two something dollars, it’d been two days ago. Even if he was tape recording me, spy camera glasses, I didn’t know what he thought, like he was being tricky.
‘Well, forty dollars is even less money, then.’
I nodded, back to my burger, the bite I took shoving wet bread up, wedging it up into the gum of the tooth I was missing and I dug at this with my tongue while he went on with his bit.
‘How would you like to make some more money than that? How about we talk about that?’
I sighed, vaguely interested—at least it wasn’t what I’d been thinking, wasn’t so banal.
‘How about we talk about it? Fine, talk about it.’
‘I’ll pay you two thousand dollars to deliver a letter to my brother.’
I grinned.
‘A small fortune. But what else is it for?’
‘It’s not for anything else. Though, I suppose there’s the stipulation that you don’t tell him it’s from me.’
My mind drifted to cinematic pretend, trying to weasel around how he’d be edging me into something I didn’t want into, but at the same time I didn’t so much care, really, because it was going to be either he gave me the money, all of it, in front or there wasn’t going to be anything about me delivering any letter to anybody and so I could just walk off if I got feeling something was askew, money in pocket, dust my hands of it all.
‘What’s he going to do with me I give it to him? I’m suppose to have a chat with him or what?’
‘Just in case, just in case he asks you something. I just need you to put it into his hand, personally, that’s the only important thing, no reason you have to say a thing to him after that.’
I ate my last bite, the girl wasn’t even behind the counter anymore so I did a phony stretch to see was she maybe wiping down some table but she wasn’t anyplace, was in back, employee toilet or something.
‘And so how would this letter have gotten to him somebody didn’t steal your wallet?’
He chuckled, very real chuckle, said he didn’t know, he’d been thinking about it all for a while.
So it was something, it wasn’t normal, not like he could mail it from a pretend address—send it to a hotel inside another envelope, little note asks them to send it along so that the postmark is someplace strange—nothing that could be left to chance or have a straight third party involved with.
It was pointless, making it all a little mystery—I wanted to know about the letter, I’d say Yes to the guy, take the two thousand, open the letter and have a look. I was no more reliable than a hotel clerk, this little scene must’ve just given the guy a kick, this little intrigue, maybe he was full of it.
And sort of mind reader, he out of nothing said ‘I like you, I think you seem the sort of person who could do this and know that’s that.’
‘I seem that way, yeah?’
He nodded. ‘Yeah.’
‘You know you have to give me that two thousand, that’s first, then I take your letter. What, your brother’s gonna kill me I give it to him?’
He shook his head, face a scrunch, a real genuine expression of it’s-nothing-like-that. In fact, I didn’t think it was—the suit of clothes I was striking the deal with, it was too earnest for that, it was something I’d never decipher and he was right, I really didn’t care and probably I would deliver the letter.
I said Alright, tilted my drink cup back, got an ice cube I broke and swallowed in two chews, looked over to the counter, behind the counter, the girl wasn’t there, still.

Check out this letter to Norman Court.
Posted by Chris Rhatigan at 6:22 AM